Book 1 of: And In Their Passing, A Darkness 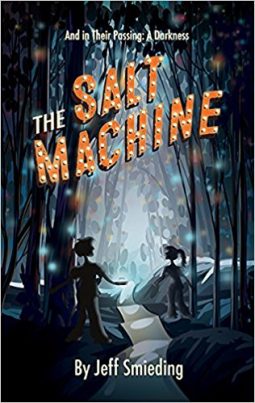 George Detzler hates crying into his mother’s Salt Machine almost as much as he loves his sister, Vera.

So when Vera gets sick of crying and disappears into the forbidden forest behind their house with a strange boy, George heads out in search of her.

In the forest, he finds himself thrown into a world scarier and stranger than he ever thought possible.

As he battles a giant wolf, finds his way through a massive labyrinth, and looks for his sister, George learns that an angry spirit is trying to bring magic back into the world. It’s up to him to stop it before it brings about the end of everything he has ever known.

”And In Their Passing, Darkness: The Salt Machine pulls the reader into a dark, mesmerizing new world, pushing its young central characters into an unsettling world filled with trouble, beauty, and, above all else, magic. Smieding writes with a clear, discerning eye and much heart. You will be transported.” –David Oppegaard, author of The Ragged Mountains & The Firebug of Balrog County

The Salt Machine is published by Red Sofa Books.