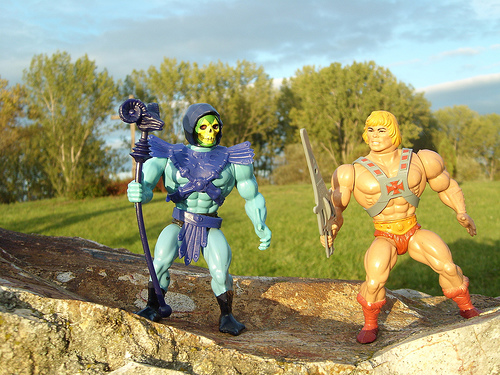 Winter, 1986 – We walked up Devil’s Hill with our sleds in tow. The hill rose steep behind Altoona High School, and the snow had been cleared off the steps that marked its ascent – old railroad ties driven horizontally into the ground to mark the way up. There was a thin path cut through the forest on the front side of the hill, but when you cleared the top, the whole thing was wide and sweeping and clear of any trees. That side of the hill looked out to the south and east, and the land dipped away from it and you felt like you could see all of Wisconsin from there. It was perfect for sledding.

Along with me were Chad and Todd, two brothers who lived down the street from my house. We trudged through the snow, young eyes squinting in the brilliance of the reflected sun. No clouds and it was in the low thirties. A January thaw. Sledding weather. Weather for snow forts and ice skates and snowball fights. I had on a Chicago Bears hat – white and navy blue yarn with an iron-on bear face and an orange and blue pom pom tassel on the top. The Bears were Super Bowl champions and had Walter Payton and the Fridge and Jimmy Mac. I loved them, even if nobody else in my family did.

We were expecting the hill to be jam-packed as we trudged up the slope of the school-side. When we finally reached the top, though, and slipped through the break in the old chain-link fence, there were only two other people there – bigger than us, but far down at the bottom of the hill: high schoolers.

Chad and Todd jumped on their sleds almost immediately, taking running starts at the hill and rocketing down toward the bottom. I went slower, keeping an eye on the teenagers, trying to angle my sled away from them as best I could. Big kids were a mystery to me. I liked He Man and GI Joe and Transformers, they liked beer and girls and dirty jokes.

In fact, to say that I “liked” He Man is a bit of an understatement. I was obsessed with He Man. I had a hundred He Man guys. They had huge bulging muscles and detachable swords and laser guns. They rode giant panthers and flying tanks. The good guys had smiles and wore bright clothes, while the bad guys were always dark and grim. Each action figure came with a mini-comic book. In the comics, He Man always did what was right and noble. He would never abandon a friend or leave anyone in need of help. He would never turn his back to the foul deeds of an evildoer. Never. I prided myself on being just like He Man. If I wasn’t strong or smart, I could make up for it, at least, by being a good guy, as best I could.

And so it was that I found myself at the top of the hill, after the third or fourth trip down and up. I was out of breath and breaking a sweat under the heavy layers of my winter gear. I watched Todd and Chad reach the bottom of the hill again. They were racing. They reached the bottom in a cloud of snow and laughter. Then, without warning, the two teenagers loped toward them like great, snowmobile jacket clad Beastmen. I watched in terror as they shoved my friends face-first into the snow.

I knew what He Man would do. We were pretty far isolated from any houses – it would have taken me fifteen minutes or more to find a grown up to help, and maybe another fifteen to get back to them. My friends needed help right then and there. Every time they stood up to run, the teenagers kicked their legs out from under them, pushed them back into the snow. I knew what had to be done, and I did it. I pulled my Bears hat down over my brow, and took a running dive on my sled. I caromed right toward them. I slipped off the sled as I neared, and gathered myself. I ran as hard as I could, packing snowballs and firing as I went. In my head, He Man shouted “I have the power!” and lightning flashed and my muscles bulged. Walter Payton, the Fridge, and Jimmy Mac followed me, riding on the crest of the wave of snow that flew up from under my feet.

“Yeaaaarrrhh!” I screamed. “Leave them alone!”

The high schoolers stared at me in bemused surprise. One had hard blue eyes and longish black hair that curled behind his ears and a scraggly adolescent beard. The other one was clean shaven, with short hair just visible under a faded red baseball hat. Both of them were in snowmobile jackets and snow pants. The plan had worked perfectly. They forgot about Chad and Todd, and now turned to me with lips half turned in sneers.

I remember how it sounded; Chad and Todd running back up the hill, thick steps thudding away from me. I remember hoping that the high schoolers would be won over by my bravado. I remember hoping they would tell me good job, and say to go back to my friends. Instead, though, they laughed and spoke in the cotton-mouthed tone of post-adolescence. The only words I clearly understood were “hat” and “Bears fan” and “Packers”.

They pushed me face first into the snow. One of them pinned my arms down while the other one threw snowballs at my stomach and my crotch. Then, they let me up, only to knock me down again. Each time, as I started running, they’d kick my legs out and start the process all over again. I remember thinking that my friends would storm out of the forest like I had done, or that somebody would stumble across the scene and rescue me. Maybe somehow Refrigerator Perry would happen to be passing through the forests of West Central Wisconsin, and would sense a Bears fan in need. The earth would shake with his footsteps as he raced toward us.

In the end, nobody came. The teenagers finally got bored, and let me go. I ran up the hill, and when I hit the top, there were Chad and Todd coming toward me, looking terrified. They held dead branches like spears. “We were just coming to get you,” they said. They didn’t need to say anything, though. I wouldn’t have thought any less of them. I understood at that moment why He Man morality was for make-believe. Heroes didn’t appear out of nowhere to avenge wrongdoing. Friends (especially 10 and 12 year old friends) didn’t defy all odds and outwit enraged giants in Ski-Doo jackets. There was no such thing as Battle Cat. Maybe there was no such thing as Refrigerator Perry.

When I got home, though, I didn’t throw all my He-Man guys into a box and tuck them away forever. I thought about it, but I couldn’t do it. Precisely because of my He Man morality. Because in He Man, when someone fought for what was right against a powerful villain, a great hero would appear and reward courage with victory. The good guys, as long as they did good deeds, always won – no matter the odds. I realized then that everybody needs that fantasy world: a place where they can pretend everything is right and good with the world. A place to escape. A place where good and evil are clearly defined by smiles and scowls, or the color of one’s clothes. Everyone needs to believe that good is rewarded with good, and evil is harshly punished. My preference is that it be punished by men in brightly colored spandex.

One Reply to “He-Man Morality”